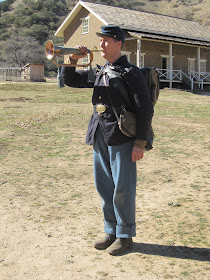 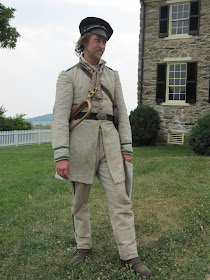 What follows is a simple guide to bugle calls that every Civil War soldier knew, and every reenactor should know.

The calls are broken down into three main categories: Marching Calls, Battle Calls and Camp Calls, with a fourth category of Assembly Calls.

Each call is followed by a period ditty you can use to help memorize it, just as a Civil War soldier would have.

You can click on each call, and it will send you to an audio clip of that call which looks like this. All you have to do is press play. If you look at the wavelength image of the recording, you'll see an orange line that indicates where the actual call starts. Everything prior to that is a verbal introduction that you may want to skip, especially if you listen to it a few times. If you drag your cursor up to that orange line after pressing play it moves you past the introduction.

These calls were recorded by George Rabai for the Mifflin Guard.

When the men have halted and a break is about to occur, you may hear the call Lie Down. When the break is over you may hear Rise Up. These are the same calls used in battle for men to lie down to protect themselves, and to rise up in order to take action. Both these calls can be found below in the Battle Calls section.

There are calls to prepare the men to reassemble and to get everyone back in line and on the march again. They are First Call, ("Get ready to get ready."), Attention ("You better not be off picking berries") and Assembly ("Get in ranks, boys.") These three calls were usually heard numerous times throught the average day of a Civil War soldier, and can be found at the bottom of this list under Assembly Calls.

After Assembly has sounded and the companies are formed and ready, To The Color is sounded to form the battalion. When sounded while in line of march, To The Color means "Prepare for battle." This call can be found below, in the Battle Calls section.

Lie Down in order to avoid any washtubs, pills or minies that might be traveling your way. "Lie right-down, lie right-down."

Commence Firing "One two three four, one-and-two-and-three-and-fire." You pull the trigger at "fire."

To The Color In this case, the call means that the orderly retreat has turned into a skedaddle and that we should rally on the colors.

First Call/Assembly of the Buglers "Damn them stinking rotten little bu-glers!" (x2)
The first noise of morning. You ain't gotta get up just yet, but you better not be late for roll.

The Reveille Everyone knows how this one goes. If you're not in your company line by the time the last note is sounded, expect to be on some kind of fatigue duty later in the day...

Tattoo The call to assemble for evening roll, after which we generally have free time in which we try to drink and gamble without getting caught.

In theory, these three calls alert the men in a company that they are to assemble for any number of reasons: roll calls, reading of orders, because the captain's in a bad mood, etc.

Attention "Attention attention, attention to all. You’d best be heeding this bugler’s call." (x2)  This is basically 'Second Call'.

The Assembly "We are the strongest men in the who-ole wide world!" (x4) This call alerts the company to assemble in formation.

To The Color would be called at that time if the battalion is to be formed also. That call can be found in the Battle Calls section.

This online guide only covers about half of the 49 calls that the common infantryman was expected to know. For more, you can go here: http://2ndcalifornia.tumblr.com
The Armory Guards have provided recordings of skirmish calls: www.armoryguards.org/bugle_calls.htm
Jan Berger has a video here: www.youtube.com/watch?v=Hbfl-afsfLs